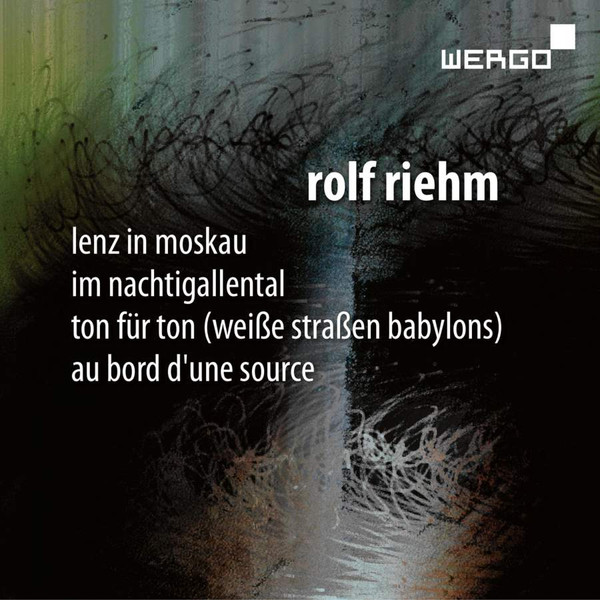 Any analogy between Riehm’s compositions and theatrical productions should not be seen to imply traditional stage conventions. But even without an imaginary stage, Riehm’s music is scenic, because in it human relationships, profoundly changed by catastrophic events, are powerfully represented through the music.

In “Lenz in Moskau” the story of the poet Jakob Michael Reinhold Lenz is told simultaneously in two very different ways: by the instrumentalists and by the voices. The solos of the trombone, guitar, and above all the singing saw, represent the characters who perform in this drama of failure, isolation, loneliness, and human debasement.

“Im Nachtigallental” [In the Valley of Nightingales] goes back to the myth of Orpheus. When his singing head, nailed to his lyre, is washed ashore on the island of Lesbos, the nightingales in the Valley of Nightingales break into beautiful song. It is said this is how poetry came into the world. Riehm has given this story to a cellist, who constantly changes roles to represent the river, the head that sings, the landscapes, the sea, the flora and fauna, dancing and happiness.

For “Ton für Ton (weiße Straßen Babylons)” [Note for Note (White Streets of Babylon)], the point of departure was a plane flight over Iraq. From the window of the airplane white desert roads are visible in the land of two rivers, the cradle of civilization. At the same time, a destructive war rages, which cannot be seen from this height. To represent these feelings of estrangement, powerlessness, and paralysis, Riehm selected the contrabass clarinet which, with its enormous expressive possibilities, provides the scene’s psychological character.

In “Au bord d’une source” [Beside a Spring] Riehm makes great extremes clash theatrically. The elegant, refined, and graceful piano piece “Au bord d’une source” from Franz Liszt’s "Années de Pèlerinage" [Years of Pilgrimage] is quoted here and there, monstrously enlarged by the full orchestra. This is not, however, a piano concerto, but rather one for recorder – an intensification of historical, traditional, and acoustical contrasts.